In the 14th century, sealed documents with the royal stamp, referred already “those well-kept vineyards of Oeyras". Then, in the 18th century, with Sebastian José de Carvalho e Melo, 1st count of Oeiras and Marquis of Pombal later, Carcavelos wine had a refined production. At the end of this century, “Carcavelos” was a prestigious wine and a very well-known wine for european elites. It was exported, especially through England, for markets such as North America, India and Australia. Law's letter of September 18 1908 defines the region demarcated of Carcavelos, formed by the parishes of S. Domingos de Rana and Carcavelos, in the municipality of Cascais, and part of the parish of Oeiras. Along it’s history, the Carcavelos wine had some setbacks because of vineyard pests. Associated with these, emerged in the second half of the 20th century the need to develop and with it the plague of property speculation that almost extinguished this excellent wine.

In early 1980, the Ribeira de Caparide, Pesos e Samarra farms, restart productive practice, and the municipality of Cascais recognized that effort and included these farms in Municipal Heritage Inventory. In the other hand, the municipality of Oeiras has invested considerable funds in the preservation and maintenance of the existing vineyard on old Quinta do Marquês de Pombal (Quinta de Cima) on new plantation area and in the recovery of the cellar.

The "Carcavelos" is fortified in large part with the famous Eau-de-vie da Lourinhã and integrates with the "Port", "Madeira" and the "Moscatel from Setúbal", the restricted group of 4 liqueur wines/generous Portuguese. In this moment there are 2 (two) producers, with the total area of vineyards 25 ha (Quinta do Marquês de Pombal of 12.5 ha.) 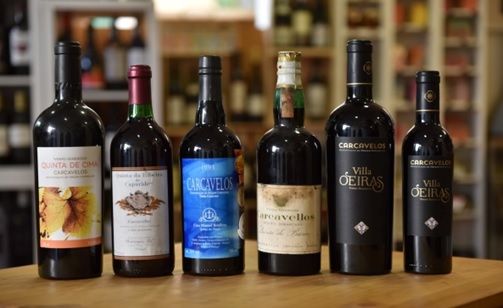 Awards achieved by the "Villa Oeiras"